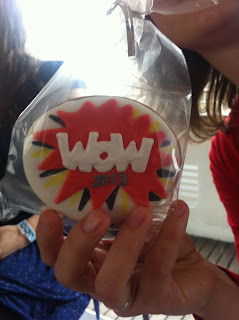 International Women's Day celebrates the achievements of women worldwide. In Russia (and elsewhere, I believe) it's a public holiday. Here at ScienceGrrl, we wanted to take the opportunity this presented to highlight the great work that women are doing in science. The recent WISE report highlighted that only 13% of the STEM workforce are women, but that's still 693,000 women doing interesting and valuable work.

We've had female scientists wandering around science museums in London and Manchester, wearing large badges proclaiming 'I'm a SCIENTIST talk to me' and occasionally jumping on a purple soapbox to tell people what we do - Jess Breen and Becky Wraggs Sykes have already blogged on this. In Manchester, we teamed up with Manchester Girl Geeks to offer soft electronics and mathematical magic workshops, run by women, to highlight the creativity of electronics and the fun you can have with maths. We've had representatives at a WISE 'Mothers of Invention' reception at the Science Museum and the Suffrage Science celebrations of women in STEM. And this morning, I joined a panel discussion concerning women in science at the Women of the World Festival, with Emily Sidonie-Grossman, Maggie Aderin-Pocock, Marieme Jamme and Kate Bellingham. What a privilege even to be added to that list! 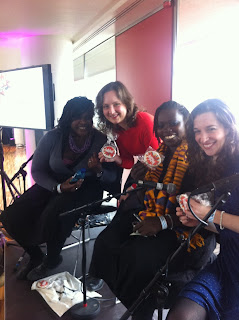 We talked about the myriad factors influencing the under-representation of women in science, from gendered marketing of toys, low confidence, peer pressure, gender stereotypes, preconceptions about absence of creativity in science, lack of emphasis on contextual teaching, scarcity of visible role models and women in leadership, cultural expectations of family dynamics (as summed up here, by The Flick)...but it was by no means negative. Kate Bellingham, the chair, did a great job of stopping me blathering on, fielding the many questions from the audience and encouraging points for action. We could have talked for hours, and I wish we'd had more time to hatch firm plans to address the issues raised. Perhaps a breakout session (with coffee and cake, obviously) is needed next year?

I was particularly encouraged by hearing from Marieme Jamme about the growth of technology hubs in Africa, South America and the Middle East, and the leading role of women in this context. It confirms to me again that the lack of women in STEM has nothing to do with women's inherent aptitude for these subjects, but everything to do with culture, education and expectation. We've been pushing against these barriers in the UK for generations, but I take inspiration from Marieme and others like her that change is – and will be – possible. Until we do, the potential of so many brilliant female scientists will remain untapped and the world will be lacking the fruits of their labours and their genius ideas.
Posted by Unknown at 10:16 pm